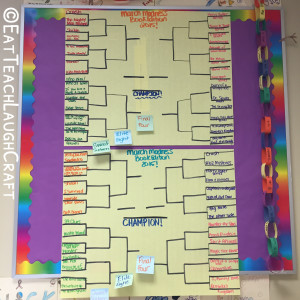 At the end of March, my students took the standardized state PARCC exam for the first time.  They worked SO hard for so long and I wanted to reward them with something after the exam.  Enter the first annual March Madness Book Edition!

The whole idea for the March Madness Book Edition was inspired by a blog post I read a while ago from Melanie over at Two Reflective Teachers (excellent blog to check out if you haven’t already!).  One of her students came up with the idea and they ran with it.  I knew immediately that my students would also LOVE something like this and I put it in my back pocket until this March rolled around. Check out her original March Madness blog post HERE.

When I introduced the idea to my students, some were immediately very into it (the students who follow college basketball) and others had no idea what March Madness or a bracket was, but were intrigued to find out.   I didn’t really have all the details of HOW this was going to be run mapped out when I first introduced the idea, but I knew I would figure it out as I went… and I did eventually :)

The first day, we discussed what a tournament is (for those who were totally clueless). I explained that during March Madness, people create brackets to try and guess which teams will move on to the different rounds in the tournament.  You will receive a certain number of points, depending on what round it is, for each team that you guess correctly on your bracket.

At this point, the students started getting excited.  They always love a good competition and as soon as I told them they would create their own bracket with their favorite books and get points if they advance, they were hooked!

Next, we needed to pick our books that would compete in the tournament.  At first, I wasn’t exactly sure how to go about this. Together as a class, we brainstormed possible options that would work.  The students decided that they would take a few minutes and talk with one another about the different books they’ve read and love so that they’re fresh on their minds.  They also pulled out their reading logs, brainstormed read alouds from this year and previous years, and  browsed through our classroom library to look for titles they love. After spending several minutes generating worthy book titles, each student made a “top 10” list.  They each wrote down ten book nominations that they wanted to be included in the tournament.  We made a rule that all series would be grouped together instead of individual books.  For example, ALL of the Harry Potter books would be one slot instead of listing each of the seven books separately.

This is the part that took a bit of teacher time to complete.  I made a spreadsheet on Excel to help my tally the votes.  Each time a new book was put on someone’s list, I would add it to the spreadsheet.  Unfortunately, not all of the books made the cut.  I took the top 32 books with the most votes and we had our seeds!

Because I am departmentalized and teach two sections of Language Arts, I did this process with both my morning and afternoon Language Arts class.  It’s interesting to see how different some of the lists are between the two classes!

[…] so in case you missed it, check out my last post March Madness Book Edition – Part 1 to see how I initially set this up in my classroom before continuing […]