We’ve successfully transitioned into our Character Study unit and I’m liking the direction it’s going so far! Because I teach 5th graders, they have studied characters in previous grades already so I wanted them to be active participants in generating our character traits list as they can pull from their background knowledge. 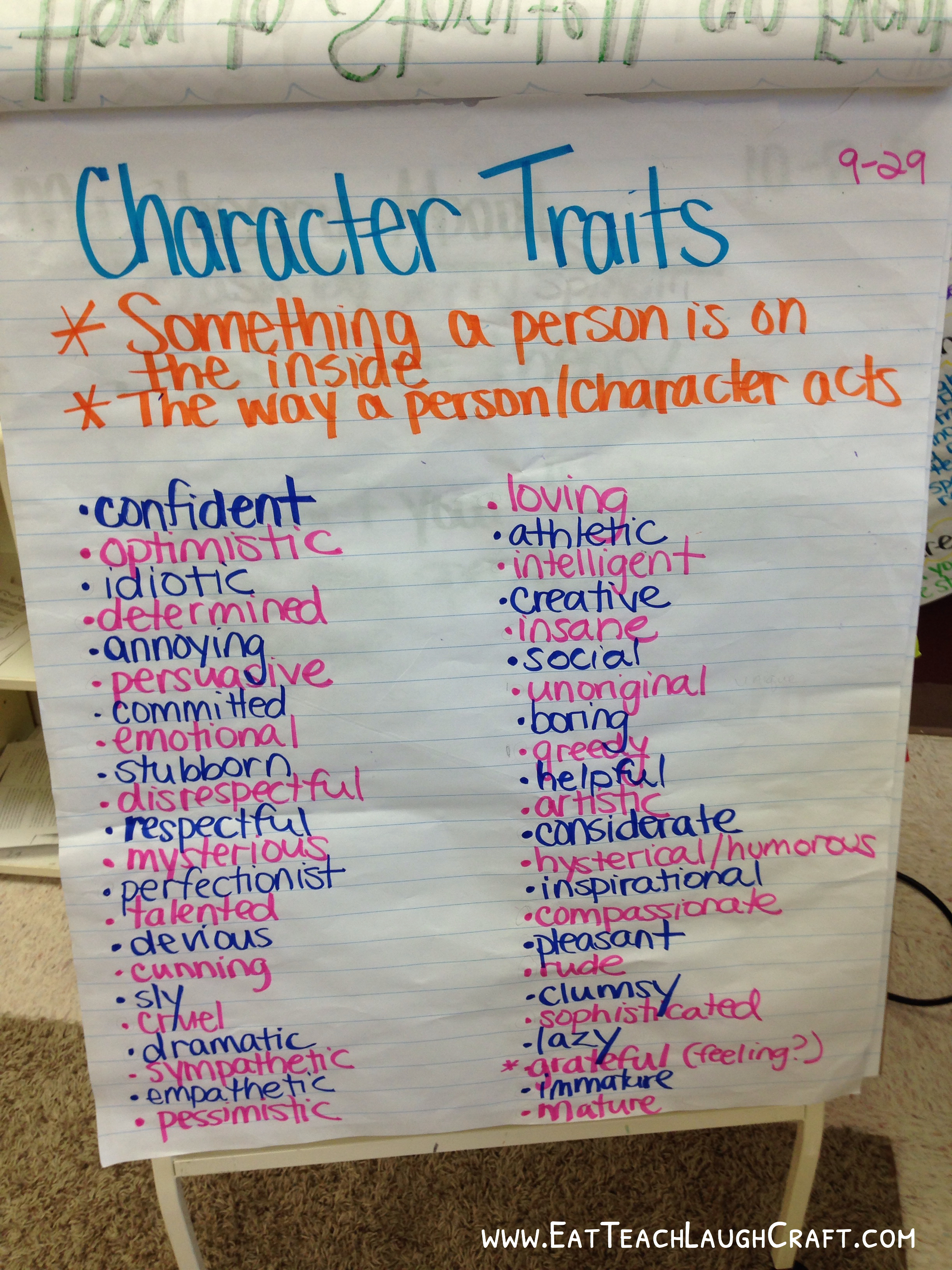 After reviewing that a character trait is something that describes what a person is like on the inside and how it differs from a feeling, the students worked in groups to generate their own list of character traits. I reminded them that now that they are in fifth grade words, they should try to choose more sophisticated words to add to the list.

After about 5 minutes, we reconvened as a class and made a communal list on chart paper. Because the students were active participants in generating the character trait list, they were fully engaged the entire time and expressed that they had fun while doing it!

The list of words they came up with was really great! They never cease to amaze me.

We refer to this list quite often.  Throughout mini-lessons, we taught the students how to use the character’s thoughts, actions, and dialogue to help determine their traits and the type of person he or she is.

At times, when close reading to reexamine the characters thoughts, actions, or dialogue, some of the students struggled to pinpoint an accurate trait.  For example, when rereading a chapter from Jerry Spinelli’s novel Crash, the students noticed that the main character, Crash, was asking a lot of questions when at the Webb’s house for dinner.  A bunch of the students determine that the character was “curious”, which in this instance, seemed as if he was for the moment.  However, there wasn’t any other evidence to support this idea.  Crash’s reason for his curiosity was very telling and I wanted

them to dig deeper and analyze WHY he was asking so many questions.

I began asking them if they thought that Crash’s intentions were positive or negative.  They started to look closer and realized that Crash’s questions were more negative than positive.  The tone and types of questions that he was asking were not polite.  They looked at the character trait list we created and determined that he was acting “obnoxious”, “rude”, or “disrespectful” by asking all of his questions. They were also able to find other text evidence to support that he was obnoxious/rude/disrespectful, whereas there was no other evidence to support he was just simply being curious.

I found that categorizing the character traits into positive and negative was very helpful for my students to think about the types of people their characters are. Therefore, I figured we needed to revamp our trait list. I wanted to rewrite it so that the students could clearly distinguish between the positive and negative character traits at a quick glance.  Here’s where the hands-on part comes in!

Once again, I wanted the students to have an active part in their learning.  Instead of me sorting and rewriting the list of character traits, I gave my students blank index cards, cut to about 1.5in wide, and asked them to write each trait on a card in pencil.

They really worked well together sorting and categorizing the traits.  I overheard some very healthy debates and thinking going.  Traits they couldn’t agree on were placed in the neutral category.

We placed the sorted traits on the wall and created a character trait word wall to reference!